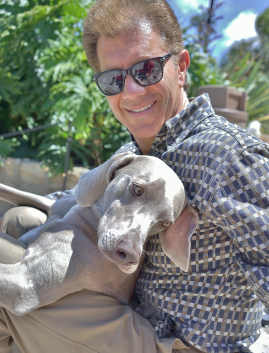 Samuel Gerard is the founder & CEO of The Ultimate Life, as well as the creator & formulator of all of its products. The following is a brief version of his story & the company's history, based on the questions commonly posed to us:

Mr. Gerard has been fascinated by human behavior since the age of 10, which is why he’d planned to be a psychiatrist. However, life led him down a somewhat different path, albeit still within the field of health & well-being.

In spite of being athletic, he ate virtually anything until he was about 20, when he had an epiphany & decided to abstain from eating or wearing animal products, for ethical reasons...but he consumed dairy & eggs, because “they're not being killed".

Within a few months, he learned the whole truth at his first animal rights conference, & instantly adopted a Vegan lifestyle in the true sense of the word (as intended by its creator, Donald Watson). He does this for health, environmental & ethical reasons.

In 1981, he moved to Santa Barbara, California, where he had his second epiphany: His body is the only shell he’ll ever occupy, so he will no longer take it for granted. Period.

Utilizing his life-sciences knowledge, he immersed himself in researching & studying the nutritional & ecological aspects of the ideal human diet, based upon clinical human studies worldwide, & his personal experience. The latter was very useful, due to his hyper-sensitive skin & digestive system.

This led to the conclusion that the ultimate food for humans does not come in the form of animal products, in any form…they come in the form of plant superfoods, preferably organic, &/or raw, &/or sprouted, &/or freeze-dried, & non-GMO, & gluten-free, because they have their nutrients & enzymes intact, as they do in nature.

However, since free radicals are the primary cause of aging & diseases, it's also important to include super-anti-oxidants derived from plants, in proper quantities.

At this point, he looked for a product that contained nothing but the ultimate ingredients, but found nothing (a fact that holds true to this day). Everything had their token single or few good or great (vs. ultimate) ingredients, with a whole bunch of fillers.

This is when he decided to make a nutritional powder for himself, using absolutely nothing but the ultimate ingredients on Earth. Period.

After numerous combinations, he eventually formulated the ultimate one, which surpassed every expectation. When those around him wanted to try it, loved it, & told everyone about it, in 1982, a new phenomenon began, which had been named ‘The Ultimate Meal’.

The overwhelming response resulted in exponential growth. But as new information & better ingredients become available, The Ultimate Meal continuously evolved to not only be ‘the best on the market’, but ‘the best it could possibly be, at any given time’, which is a completely different standard.

THE ULTIMATE TEST: On November 28th in 1988, Mr. Gerard had the ‘opportunity’ to put his vegan diet & The Ultimate Meal to the ultimate test, when he was struck, then run over by a truck as a pedestrian. He suffered numerous injuries, the worst being a crushed femur, which was in 3 pieces, one of which stuck out of his body.

PROGNOSIS: He was told for the rest of his life, he would have a limp, shooting pains, rheumatoid arthritis, & need a cane.

REALITY: However, thanks greatly to his diet & Tai-Chi (long form), every one of those ‘predictions’ didn’t materialize. In fact, he exceeded every expectation by healing almost completely, & at record speed. So much so, that the surgeon started ‘prescribing’ The Ultimate Life products to his patients.

UNEXPECTED SCENARIO: A few years later, a dedicated mother, whose son was bedridden for life, saw such an improvement in him that she went through the trouble of trying to have a Medicare code assigned to all 4 products! Thankfully, she succeeded with The Ultimate Meal, to be used as the source of food for an intubated patient! After 20 years, her son is 50 now, & still on them! (If it applies to you, email us for the code number.)

In late 2013, after extensive R&D, all 3 supplements, plus 2 superfoods, were combined into a single super-supplement called…what else: The Ultimate Supplement! This created an entirely new category, which remains unmatched to this day. It’s the only thing that’s needed besides The Ultimate Meal. Period.

Please inform yourself thoroughly by reading our entire site verbatim (word-for-word). You’ll notice it’s not like most sites, in that it’s far more informative than anyone anticipates. That’s because we expect you to want to know what it takes to get the most benefit from our products.